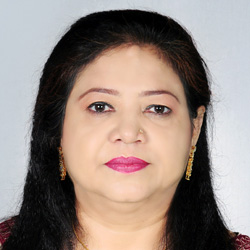 Ms. Sophia Shaik started her career in social service at the age of 15 years, under the tutelage of her father Sk. Abdus Salam. She has been continuously taking guidance and inspiration from her father since then, in her endeavor to serve the poor, underprivileged and destitute sections in the society through her NGO Society for Weaker Community (SWC) which was established by her father, in 1987. Till date, over 50,000 women and over 60,000 children (boys and girls) have been benefitted with her work.

A life-threatening attack on her father, when Ms. Sophia Shaik was hardly 14 years old, made her go on a hunger strike clamoring for the arrest of the culprits. Nothing could break Ms. Shaik’s iron will. Thus began her rebellious journey 35 years ago in Bhadrak district in Odisha. Fighting relentlessly for the rights of women and children, Ms. Sophia Shaik embodies ‘Shakti’ or the female power. She has the distinction of being the first crusader against the practice of ‘Triple Talaq’ in Odisha. Her daredevil endeavors have also helped in rescuing girls from sex trade and put the accused through rigorous imprisonment. Ms. Shaik maximizes the outcome of her work by seeking support and guidance of the local administration, law and order and the legal support system.