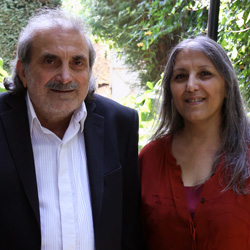 Dr. Ogarit Younan and Dr. Walid Slaybi are pioneers of non-violence in Lebanon and the Arab world.

Dr. Younan, is considered as a reference in Social Training, Nonviolent Social Innovations, Alternatives for the Sectarian System and Laws, in Lebanon. Dr. Slaybi is known as the main strategist of non-violence, direct actions, and civil campaigns. He is a writer, researcher, university lecturer, and an author of 22 books and research. During their first nonviolent actions during wartime in Lebanon, they worked against war and towards socio-economic actions for social justice, against impoverishment and for people’s rights. Their Academic University College for Non-Violence and Human Rights (AUNOHR), a University for Non-Violence, is building a strong foundation for peaceful and cohesive societies.

The non-violence and peace work have also been carried out by translating the non-violence heritage, and for the first time Mahatma Gandhi’s books into Arabic. Some of the books have been rewarded as best sellers.

It is because of Dr. Younan & Dr. Slaybi, that non-violence came to exist, to be nurtured and institutionalized, over the past four decades, in Lebanon and the Arab world, as a new and avant-garde vision.