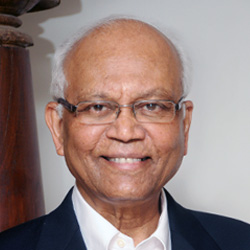 Raghunath Anant Mashelkar is known for his own world class scientific research, his transformative leadership of research institutions, his pioneering game changing Indian movements - from traditional knowledge protection to creation of strong yet balanced IPR (Intellectual Property Rights) systems, to inclusive innovation movement based on the concept of Gandhian Engineering. He has been an influential thought leader in shaping Science, Technology and Innovation policies in post liberalized India.

Dr. R. A. Mashelkar has been an ardent champion of inclusive innovation. He pioneered the concept of Gandhian Engineering, namely getting ‘more from less for more’. He created ‘Anjani Mashelkar Inclusive Award’, which honours breakthrough high technology which works for the poor and creates access equality despite income inequality. Dr. Mashelkar's book ‘Timeless Inspirator: Reliving Gandhi’ shows how Gandhi is even more important in 21st century than he was in the 20th century.

He has received 45 honorary doctorates from universities around the world. The President of India honored Dr. Mashelkar with three of the highest civilian awards, namely Padma Shri, Padma Bhushan and Padma Vibhushan.