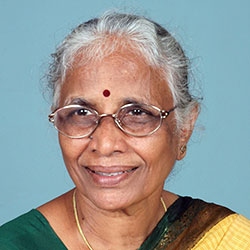 Dr. Nannapaneni Manga Devi dedicated her life for the cause of the women and children and has been working for the past 50 years through Sri Venkateswara Bala Kuteer and Chetana Charitable Trust, which are her own creations.

In 1959, Dr. Manga Devi joined Women and Child Welfare Department. Then she had undergone training in Gandhigram, Madurai where she developed a strong urge to do something for the society, following Gandhian principles. She then trained herself in Montessori System of Education. Dr. Manga Devi gave up the government job and in 1965, set up a Montessori House of Children - Sri Venkateswara Bala Kuteer in Brodipet - the first school of its kind with one girl child, later expanding multifold, creating opportunity for children’s education, with a difference.

Later inspired by Mother Theresa, she set up Chetana Charitable Trust- a multi purpose rural project in 1990 in Chowdavaram, mainly to serve the poor and needy. It has become the hub of all her welfare activities for the upliftment of downtrodden women and children ensuring their development and security. Apart from lifting these children from poverty trap, rehabilitation of physically challenged children, development and welfare of the girl child, rehabilitation and employment of destitute women, shelter and solace to the old, and school on wheels to create access to education to the deserving children; were other activities in her exhaustive agenda. After a thorough need assessment, sensitizing the girl child for education, health and hygiene, providing libraries and learning resources in schools especially government schools, organizing youth leadership programs to promote appreciation of their culture, country and the community - thereby developing the spirit of patriotism and nationalism, were undertaken with great impact.

Dr. Manga Devi has also set up three formal schools enrolling around 4000 children. She has a strong support of her over 6000 odd alumni who have pledged to support her service activities.

Since 1982, over 27,400 rural women and volunteers are trained in the Anganwadi Workers Training Centres of Sri Venkateswara Bala Kuteer.

Her `Dr. Manga Devi Bala Sahitya Puruskaram’ recognises children's literary contribution and encourages upcoming artists. Dr. Manga Devi, an epitome of love, is a visionary, a close friend and a mother to all the children.