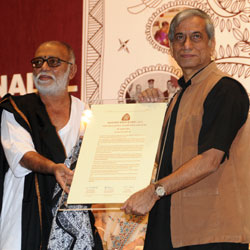 Mr. Anupam Mishra has spent over four decades in the field of environmental and water conservation and is a name to reckon with for traditional water-harvesting systems in India.

The time-tested systems of handling water - systems which have supported life and civilization in India for millennia, and which did not need any government support or engineering intervention - are woven into the lives of peoples and societies by Mr. Mishra. These also led to his traveling through the country and document these traditions.

While he started as a young writer-activist in 1971 at the Gandhi Peace Foundation, it is very motivating to know that his first major assignment was with a team negotiating the surrender of the dacoits of Chambal. Also it was through Mr. Mishra’s reportage that the world learnt of the Chipko Movement, which has since become a symbol of environmentalism. People who led the Chipko Movement find a friend, a supporter and a guide in Mr. Mishra.

Mr. Mishra is a writer and an orator par excellence. His book - Aaj Bhi Khare Hain Talab - published in 1993 is celebrated as much for the depth of its research and its refreshing perspective as for the quality of his writing. It refreshes India’s traditional water philosophy, inspiring activists to think beyond social and civil engineering, and recovers and revives practicable water solutions.

It is heartening to know that about 5000 large and small water bodies have been revived by people inspired by this book. The World Bank offered the Andhra Pradesh and Karnataka governments to translate the book and distribute 50,000 copies to revive existing ponds instead of building new ones.

Mr. Mishra’s writing goes beyond environment policy discussions to the philosophy that governs the relationship of the society with their physical environment. As the `Water Guru’ of our country, Mr. Mishra’s movement for promoting smart water management; and preserving traditional rainwater harvesting techniques is indeed exemplary and commendable. Mr. Mishra has a rare quality of involving young people to undertake concrete work in water resource conservation and development sector.