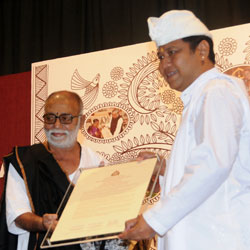 Agus Indra Udayana since a decade has been actively engaged in promoting Gandhian values in Indonesia through his four Ashrams in Bali and Lombok based on the principles of non-violence, truth and humanitarianism.

He is disseminating Gandhian ideologies particularly those relevant to the prevailing social concerns and has translated Gandhian writings into Indonesian language.

Prompted by concern for the spiritual, cultural, social and economic life in Bali, the Ashram Gandhi Puri was instituted to promote enduring interfaith and dialogue to create cultures of peace, justice and healing.

Under the leadership of Agus Indra Udayana, the Ashrams facilitate accommodation and overall developmental support to the economically marginalized students. The local people have benefited tremendously from the services and teachings of the Ashram in the areas of brotherhood, self reliance, environment, peace, etc.

Agus Indra Udayana proactively works towards promoting Indian art and culture in Indonesia and has sought support of the Indian Council for Cultural Relations to promote Balinese culture in India.

Agus Indra Udayana maintains close contacts with the prominent Gandhian institutes and scholars in India. He regularly participates in social work activities in India, Indonesia and other parts of the world working in close co-ordination with the non government organisations (NGOs) promoting Gandhian values.