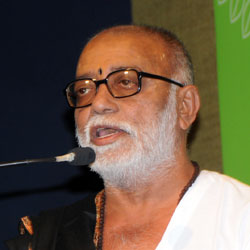 Pujya Morari Bapu was born on September 25, 1946 to Prabhudas Bapu and Savitri Ma Hariyani on the auspicious day of Maha Shivratri in Talgajarda near Mahuva, Gujarat. Born into the Vaishnav Bava Sadhu Nimbarka Parampara, Morari Bapu is referred to as “Bapu” (meaning Father).

Bapu spent most of his childhood under the guidance of his paternal grandmother, Amrit Ma, often spending hours listening to folk tales from her traditional India. At the age of five Bapu began learning the Ram Charit Manas from his paternal grandfather, who is his only Guru, Tribhondas Bapu. Both of Bapu’s paternal grandparents were the influential guiding forces behind his upbringing.

At the young age, Bapu was also encouraged through letters from his paternal grandfrather’s brother, Mahamandleshwar Vishnudevanand Giriji Maharaj, an ascetic of the Kailas Ashram in Rishikesh, to be proficient in the Bhagvat Gita and the Vedas.

During his ten years as a teacher, Bapu often took time off to listen to prominent speakers and to meet some of India’s most revered spiritual leaders. At the same time, Bapu’s interest in Indian literature and poetry grew fonder and he regularly attended sessions on various literacy subjects by high ranking orators.

In his everyday life one can see a conglomeration of ideals that are the basis of a good social structure, and on the other side, smoothly harmonized spiritual practices, devoid of all harshness. Bapu’s entire living is to bring many different branches and sects of all religion and the different levels of society to a common ground of undivided understanding, love and unity. He shows a way of uniting not just one nation, but the entire human race, while at the same time preserving their individuality. He refers to his Ram Katha as a prem yagna where people gather in the name of love and expressly calls out to humanity for love and respect for each other.

In Bapu’s words, the summary of righteousness - dharma is threefold: truth - satya, love - prem and compassion - karuna. Bapu’s life is like the flow of the river Ganges - Ganga pravah similar to how new water continuously replaces the current stream. Bapu believes in flowing traditions - pravahi parampara that evolve with the times.