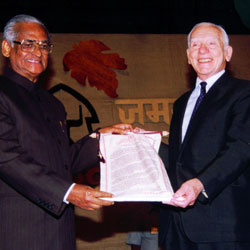 Is Emeritus Professor of Physics in the University of London, at St. Bartholomew’s Hospital Medical College. Has made significant contribution in the fields of Nuclear Physics, Medical Physics and Radiation Biology. Is known for his total commitment and life long dedication to the cause of peace, prevention of armed conflicts, and persistent endeavours to arouse the conscience of scientists to devote their skill and ingenuity to the true purpose of science, to be of service to mankind while at the same time adhering to ethical values.

Worked on the first atom bomb in the United Kingdom (UK) and in Los Alamos during World War II. Resigned from the Project as soon as it became clear that Germany was not working on the bomb. Was the only Scientist to have left the Manhattan project before the bomb was tested.

Following the trauma of working on a weapon of mass destruction, he changed the direction of his research to one which could be directly applied to the benefit of mankind, namely medicine.

Was largely responsible for the comprehensive reports of (1984 and 1987) of the World Health Organisation on the Effects of Nuclear War on health and Health Services.

Was one of the signatories of the Russell-Einstein Manifesto and a Co-Founder, of the Pugwash Conferences on Science and World Affairs. Received Nobel Prize for Peace in 1995. The Pugwash Movement is based on the recognition of the responsibility of scientists for their inventions.