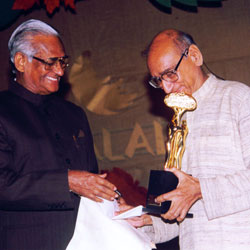 Has devoted entire life in the constructive movement working for the welfare of the poor. Was an active participant in the Quit India Movement. Assisted his father Shri Mahadev Desai who was Gandhiji's Secretary in constructive activities and, later, Vinobaji in all activities associated with the Bhoodan Movement. Was a participant in the Students' Shanti Sainik Sena Movement started by Jayaprakash Narayan throughout the country. Is the founder of the Sampoorna Kranti Vidyalaya, Surat.

Trained peace volunteers and was the National Secretary of the Shanti Sena which involved him in recruiting Shanti Sainiks, training them and launching of the Tarun Shanti Sena to work on the Indo-China border. This was an effective movement of national integration.

Worked for the relief and resettlement of refugees from Bangladesh. Organized an international Delhi-Beijing March.

Is President of the World War Resisters' International. In March 1995, he was invited by the Non-Violence International at Washington D.C. for consultation on working of unarmed peace teams in situations of international conflicts.

Has won several awards such as Harmony Award for National Integration and the United Nation Educational, Scientific and Cultural Organization (UNSECO) International Madanjeet Singh Prize for tolerance and Non-violence in 1998.