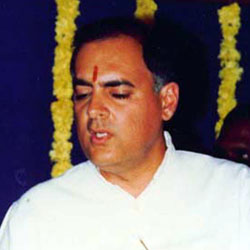 Born in Bombay. Son of Feroze and Indira Gandhi.

Early education in Doon School. Went to Trinity College, Cambridge. Soon shifted to the Imperial College (London). Did a course in mechanical engineering.

Politics did not interest him as a career. His greatest passion was flying. Obtained a commercial pilot's licence from Delhi and became a pilot with Indian Airlines.

But after his brother Sanjay's death in an air crash in 1980 , pressures mounted on him to enter politics and help his mother. Won the by-election to the Parliament from Amethi in Uttar Pradesh.

Successfully executed the assigned task of getting all the work completed on time and ensuring that the Asian Games were conducted without any hitches or flaws. Became General Secretary of the Congress.

After mother Indira Gandhi’s brutal assassination in 1984, he bore the awesome burden of personal grief and national responsibility with remarkable poise, dignity and restraint. As the harbinger of a generational change in the country, he received the biggest mandate in the nation's history. At 40, he was the youngest Prime Minister of India.

While campaigning for the 1991 general elections, he was assassinated by the Liberation Tigers of Tamil Eelam (LTTE or Tamil Tigers) group. Rajiv Gandhi was posthumously awarded Bharat Ratna, the highest national award of India.