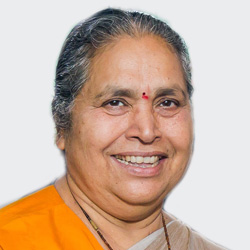 A traumatic incident prompted Sr. Lucy to realize that she could no longer be a silent spectator to the horrific violence and abuse against women. In 1997, Maher which means “Mother’s Home” was founded to provide safe haven for battered and destitute women.

Sister Lucy’s tireless efforts and the work of the dedicated team led to the expansion of Maher activities from one small home near Bhima Koregaon to nearby villages and the city of Ratnagiri, Miraj and Satara in Maharashtra and in states of Kerala, Kolkata, Andhra Pradesh, Karnataka and Jharkhand. Today, it reaches the life of the poorest of the poor through as many as 24 different outreach projects. Since its founding, Maher has provided care and shelter to more than 5000 children and 5900 women. Sister Lucy bestows her warmth and love on the abused and traumatized women, children, men and the old and aged people. Her journey has been dotted by courage and pure love for the unfortunate ones of the society. Sister Lucy’s calling is reflected through her sewa, which she is passionately committed to bring light and smile in the lives of those who reach Maher.