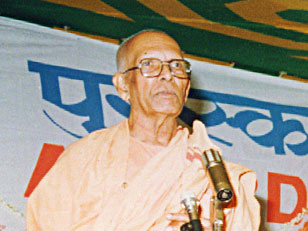 We can say that sometimes the foreigners may make better use of Gandhiji than we did. There is one Cesar Chavez in America. There was a strike by Grey Pickers in the California. They wanted more salary and could not get from the owners. Chavez was the leader of the Union. He started a satyagraha. He had Gandhiji’s photo in his own office room. He fought for the labour class, using Gandhiji’s methods without any violence and a settlement came between the owners and the workers. Similarly in Europe, we had already a Frenchman who did Gandhiji’s way of living and working and became a recipient of this Award earlier. Today it is Italian and I am sure Soviet Russia is going in that direction. So whatever we have in this country, there are several things which are meant for all humanity.