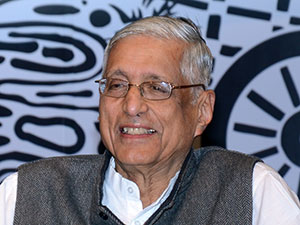 During the old struggle which led to these Awards, the question was, ‘How do we free ourselves from the domination of the British Empire?’

Today the question is, ‘What will Rising India do for the world?’

Are we ready for this new role? Will India’s performance be better than that of smaller Western powers when they were the top dogs?

As we in India reflect on our global role, we need to think also of life inside India and in Indian society. In their time, Jamnalal Bajaj and his wonderful colleagues looked around and said to themselves, ‘We cannot bear this subjugation and this exploitation. We will throw off our shackles.’ And they did.

We should look around us and ask, ‘Are we satisfied with our society with its suppressions and oppressions? Should we not tackle the humiliations in Indian society even as our fathers addressed the humiliation of being ruled by a small nation thousands of miles away?’

We should ask ourselves: ‘Don’t we often suppress and shout down one another?’ ‘Do we recognize the goodness and potential greatness in our fellow citizens?’

Jamnalal Bajaj died suddenly in 1942, just before the great Quit India movement was launched. After independence, some persons said, ‘We need a Knit India movement for bringing Indians together.’ They were right.