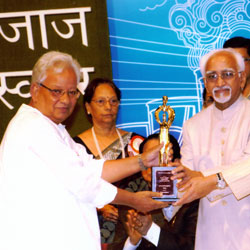 Is the Secretary of the Tagore Society for Rural Development, Kolkata. It focuses on the areas relating to childhood education, adult education, comprehensive health programme, social forestry and ecological development.

Is a living bridge, for 37 years, with the hope - and the means - for development to thousands of people living among the mangrove swamps of that area.

Was included as a member of the Working Group constituted by the Government of Tripura for suggesting a road map for the future development of human resources and Bio-technology of the State Planning Board. for undertaking a detailed evaluation of this sector.

Is a Member of the Sunderbans Development Board and Chairman, Task Force for Preparation Master Plan for entire Sunderbans; of National Committee for Promotion of Economic and Social Welfare, and of the Standing Committee of CAPART, .Government of India.

Was "The Week" magazine’s Man of the Year among the 20 social workers who have transformed the life of thousands of people.

Has received recognition in the form of a number of Awards: National Teacher in 1984; the Padma Shri in 1996; an Award from the Institution of Engineers (India) 1991; “Indian Living Legend" award from the Voluntary Action Network India, Delhi; the "Rathindranath Puroshkar" by Viswa - Bharati University in 2006. Has been included in the Penguin publication entitled "Prophets of Modern India" in 2004.