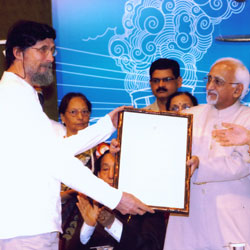 3 Years (Bachelor degree) in Philosophy and Bible Theology with University of Strasbourg (France).

Joined Lanza del Vasto (Shantidas), a disciple of Gandhiji, in the Community of the Ark, in France. Was initiated into non-violent demonstrations and fasts organized to protest against French nuclear tests.

In 1978, created the Mosaic Association to take care of the "Social Handicapped" people (drug addicts, alcoholics, prostitutes, the homeless).

In 1999, made his first trip to India and produced a documentary film "The Gandhian legacy today in India".

In 2001, created the Shanti Association to promote Gandhian thought through video documentaries and articles. Through the production of his documentaries, many non-violent struggles and situations of precarious communities abroad have gained world wide attention, which has enabled them to get support and help from many people and organizations in France. The documentaries include: "War is not the solution, it is the problem - The meaning of Fasting", ''Anandwan, the joyful forest, or another world is possible", "Civil disobedience: The breathing of democracy", "Outraged Africa, broken Africa, but liberated Africa?”

Participated in eight day street fast against the Iraq war; the World Forum in 2004; various civil disobedience actions against GMO (genetically modified organisms); Congress for Peace and Non-violence in Wardha; the Janadesh March from Gwalior to Delhi organized by Ekta Parishad.

Led various study visits with French activists to the Institute of Gandhian Studies to prepare for the 2008 Congress on Peace and Non-violence.

Co-organised, in 2008, with the Institute of Gandhian Studies in Wardha, the Congress for Peace and Non-violence, supported by Nobel Peace Prize winner Adolfo Perez Esquivel.

His actions and activities have led to a better knowledge and appreciation of Gandhi's thought and life in France where he could federate various French organizations under a single Gandhian banner. Has considerably extended the scope of non-violent activism and Gandhian thought in Europe.