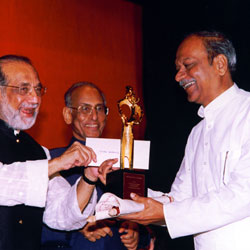 Has done pioneering work in the field of Agro-forestry on a co-operative basis. Established the Nashik District Eucalyptus Growers' Co-operative Society in 1983. Fifteen million eucalyptus trees have been planted by the Society so far.

Has successfully marketed the agro- forestry output in an efficient way. Has been approached by farmers from other States like Punjab, Haryana and Madhya Pradesh for guidance for forming Tree Owners' Co-operative Societies.

Did pioneering work in the promotion of Jatropha cultivation in the country. This has provided an alternative cropping pattern which may help to mitigate the energy and oil crunch and thus save foreign exchange.

Has also pioneered an agro-forestry project in Egypt and has provided consultancy on nursery plantation technology of both eucalyptus and Jatropha.

The Food and Agriculture Organisation of the United Nations has highly commended his work has mentioned it in a book entitled "Marketing in Forestry and Agro Forestry by Rural People".