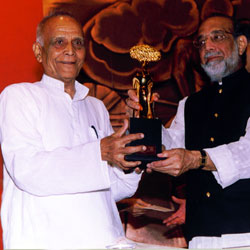 Born in a small village in Ballia District of Uttar Pradesh.

Joined the freedom movement in his school days on the call of Netaji Subhash Bose. Did not hesitate to use arms as a means of attaining India's Independence. Gandhiji's death in 1948 was a turning point. Deided to rededicate his life to the service of the Nation by non-violent means.

Spent early Gandhian life in Bihar where he actively participated in Vinobaji's Bhoodan movement. Moved to the Bhutan border in Assam, in the wake of the Chinese aggression, as a Shanti Sainik. Slowly spread the Gramdan philosophy in the villages. Founded Tamulpur Anchalik Gramdan Sangha (TAGS) in 1962 which now serves as a Khadi Gramodyog Training Center.

Was jailed for opposing the Emergency.

Helped in establishing a common granary; organised a number of balwadis in Assam and in Arunachal Pradesh; provided low cost sanitation for houses in a Gramdan Village; established biogas plants and arranged digging of wells for safe drinking water; undertook relief operations for famine affected agriculturists.

Started a training programme called the "New Weavers' Training Centre". Has come to be known for their fearless struggle on behalf of the minority and marginalized communities, the famous Angarkata Satyagraha being a shining example.

Is at the helm of various Khadi and Sarvodaya networks. The Government of India honoured him with Padmashri in 2000.