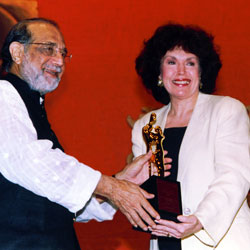 Is a prize-winning author, political scientist, and a well known civil rights leader in the USA. Was, as a student, one of the few white participants in the U.S. civil rights movement working alongside Dr. Martin Luther King Jr. in the crusade for racial justice.

Won a 1988 Robert F. Kennedy Memorial Book Award for her book "Freedom Song: A Personal Story of the 1960s Civil Rights Movement" (1987). The four years she spent at the vortex of the civil rights movement mark the start of a life-long study of Gandhian values and non-violent strategic action in political conflicts.

Is now Professor of Peace and Conflict Studies at the University for Peace of the UN. Is also Distinguished Scholar at the American University Center for Global Peace, in Washington, D.C.

Had world-wide responsibility for the Peace Corps , VISTA (Volunteers in Service to America) and other national volunteer service programmes as a Presidential appointee confirmed by the U.S. Senate.

Worked with former President Jimmy Carter and his wife Rosalynn for more than thirty years. Has since 1984 participated in some of his peace-building efforts and served as his special adviser on the Middle East.

Her efforts for the advancement of women were crystallised when she chaired the Committee of 51.3% during the 1976 Carter Presidential Campaign, a policy and strategy arm of the campaign that sought to increase the participation of women in the American political system.