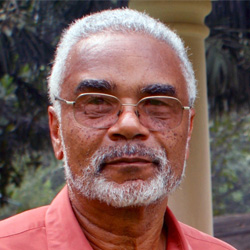 During his student years, Dr. Carson participated in movements for human rights and joined Martin Luther King at the age of 19 for the historic 1963 march to Washington D.C. Based on his experience with human rights and antiwar movements, many of his subsequent scholarly writings have stressed the importance of grassroots organizing and nonviolent resistance to injustice.

In 2008, Dr. Carson began teaching courses on Gandhi and King. During his trips, Dr. Carson lectured at many universities and institutes in India. He also created an online social network – The Gandhi-King Community: For Global Peace with Social Justice in a Sustainable Environment – with more than 1600 members. Because of his desire to reach the popular as well as academic audiences, Dr. Carson has helped produce more than two dozen documentary films. Dr. Carson has also brought King’s ideas to the world by lecturing in more than twenty European, African, and Asian nations.

Dr. Carson’s scholarship and devotion to the cause of global peace and social justice has resulted in many awards and four honorary doctoral degrees, including one from Morehouse College, where Martin Luther King, Jr. and Martin Luther King, Sr. were once students.