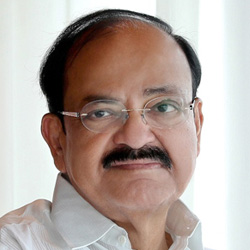 Mr. M. Venkaiah Naidu is the Vice President of India and the Chairman of the Rajya Sabha. By profession he is an agriculturist, political and social worker.

As a student leader and political figure, Mr. Naidu gained prominence as an effective orator, who championed the cause of the farmers and the development of backward areas. Mr. Naidu was the Leader of Bhartiya Janata Party (BJP) Legislature Party in Andhra Pradesh during 1980-1985. He served as the General Secretary of the All India BJP from 1993 to 2000 and was the National President of the BJP from 2002 to 2004.

After serving in various organizational posts of the BJP at the state and national level, Mr. Naidu was elected as a member of the Rajya Sabha from Karnataka in 1998 and was re-elected twice, in 2004 and 2010. The period of Mr. Naidu’s tenure as the Union Cabinet Minister for Rural Development in 2000, saw reforms and transformation in rural development and introduction of the many schemes.

He is continuing his reformative actions as the Chairman of the Rajya Sabha in the functioning of the Upper House for the past one year.

Mr. Venkaiah Naidu has travelled widely to several countries. His articles in newspapers focus on the subjects of political and public interests.