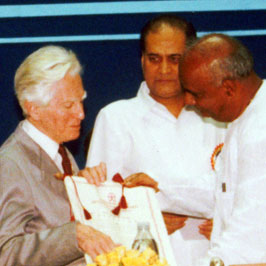 A lawyer (1936) and Doctor of Law. Also studied Philosophy and Literature.

Has been a faithful and consistent practitioner of Gandhian values and ideals both in personal as well as public life.

Is credited for the increasing appreciation and admiration of Gandhian ideals of truth, peace and non-violence in Argentina today. Called the ‘Argentinean Gandhi'.

Drew up the declaration “Argentine-Chilean Peace and Friendship” (1979).

Was a member of the Executive Committee of the Gandhi Library. Participated in a meeting on “The Rise of Violence” organized by “Sur” (1968) and the one organized by the PEN Club on “Violence and Non-violence”. One of the foremost members of the Group of Friends of the Ark, inspired by Lanza del Vasto, Mahatma Gandhi's direct disciple.

Participated in “Dialogue of Cultures”, a colloquium organized by the UNESCO in Buenos Aires (1977). Visited India in 1984 at the invitation of the Indian Council of Cultural Relations.

Authored ‘Solar Genealogy”, “Terrors of the year 2000”, “Alberdi and Non-violence. A precursor of Gandhi?” “Time of Prophecy”, “Theory and Realization of Universality “, “Time of All or Nothing”. “Argentina Consciousness. An Ethical Concept of Nation”.