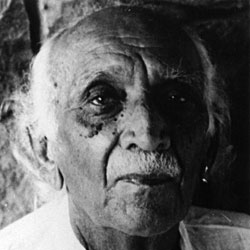 The greatest contribution of Shri Manubhai Pancholi is as an Educationist, a Constructive Social Worker, a man of letters as well as a thinker.

Left home and studies in order to join the freedom struggle. Suffered imprisonment. Entered the field of education and remained a real teacher all through life, making various experiments. Did the work of basic education from 1937 to 1953 at Gram Daxinamoorti-Ambia, Dist Bhavnagar.

Established agriculture, cattle breeding and, dairying and cow keeping as an alternative craft in the development of villages in the curriculum of Nai Talim.

Founded a rural institute of Higher Education at Lok Bharati, Sanosra in 1953. Established Pandit Sukhlaji Lok Vidyalaya in 1978 at Maidhar, Dist.Bhavnagar to take education to the doorstep of rural people.

Lok Bharati researched and developed a new variety of wheat named LOK –1. Has implemented the project of water conservation through farm ponds in the 7 neighbouring villages. To make villages self-reliant, the village adoption project came into existence.

Has authored 6 novels and plays, 7 books on Social Philosophy, 3 on criticism, 4 on education, 6 on history, 7 biographies and 2 collections of letters.