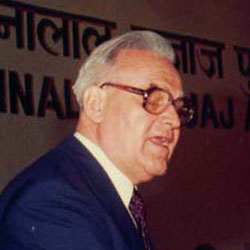 Born in Baden (Lower Austria). Studied law at the University of Vienna. PhD. In 1958. Became a lecturer at the University of Vienna. Law consultant in the scientific department of the Federal Chamber of Commerce in Vienna in 1965. Associate Professor at the University of Leopold-Franzens-Universität Innsbruck. Is a member of the Academy of Sciences in Padua, Madrid, Dusseldorf and Milan and the Papal Academy of Social Sciences; Consultant to the Pontifical Council for the Family, was appointed Gentiluomo di Sua Santità in the Vatican, an Honorary member of Czech society scholar in Prague, and Honorary President of the Austrian Commission of Jurists.

Published several books and was active as a publisher.<

Awards and recognitions include: Cardinal Innitzer Prize (1962), Leopold Kunschak Award - Science Award (1965), Culture Prize for science of the town of Baden near Vienna (1981), Bavarian Order of Merit (1984) and Honorary Doctor of Law from Universities of Chile, Washington, Prague, Wroclaw, Liechtenstein and Pitesti.