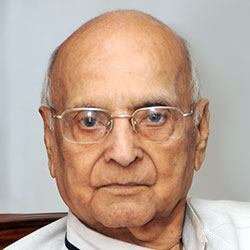 Dr. Justice Chandrashekhar Dharmadhikari, Chairman, Council of Advisors, Jamnalal Bajaj Foundation is a name to reckon with as a truly inspiring speaker, a Gandhian thinker, an Indian independence movement activist, a lawyer, a judge and an author.

At the age of 14, he took part in the Quit India Movement and has been recognized by the Government of Maharashtra as a Freedom Fighter. He was acting Chief Justice of the Bombay High Court from 1972 until his retirement in 1989. Hardly inactive since retirement, Dr. Jst. Dharmadhikari was awarded the Padma Bhushan (the third highest civilian award in the Republic of India) in 2003. He has also authored many books in Hindi, Marahi and English.

Dr. Dharmadhikari also associated with the National Women’s' Commission - today is revered as a backbone of Sarvodaya Movement.