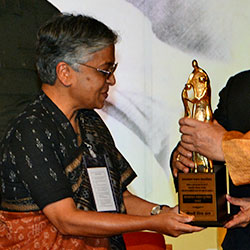 Ms. Vidhya Das, through Agragamayee, has been working, since over 25 years, in the areas of policy advocacy, socio-economic and human rights of the tribal people, natural resource management, formal and non-formal education, awareness generation and skill development involving tribal people’s participation and mobilization. She is fighting for the rights and empowerment of some of the most downtrodden, tribal communities residing in the backward areas of Kalahandi, Bolangir, Koraput, Rayagada districts of Odisha. Agragamee is known for its unequivocal stand for the rights and justice of the tribal, dalit and other underprivileged and exploited communities.

One of the most successful efforts of Ms. Vidhya Das has been her mobilization of tribal women to demand rights over minor forest produce. Through her close involvement she has been able to mobilize and inspire tribal women to undertake a sustained and systematic struggle on this issue, which eventually led to a policy change at the State level, ensuring that the rights for minor forest produce were handed to the Panchayats in all the tribal areas of the State. This resulted in the historic broom revolution which transformed the lives of the tribes.

Ms. Vidya Das’s persistent and painstaking efforts have encouraged around 5000 tribal women of 200 villages, across 5 districts to organize groups to address issues of discrimination, exploitation, corruption and violation of basic human rights. Her efforts to create awareness on the governmental programs and services available to the people have led to women demanding accountability of the schemes.

In the field of tribal education, not only has Ms. Das been able to mobilize women to ensure that girls get an opportunity to go to the school, but she has also mad systematic and sustained effort to mobilize resources for educating the tribal children in 210 villages in the tribal regions of Odisha. The models of language and methodology of teaching mathematics developed by her are being followed in different primary schools via various voluntary organizations in the State. 5000 tribal girls and boys now have access to primary education and higher education due to the efforts in implementing non-formal education by Ms. Vidhya Das and her organization, 600 tribal girls from villages with zero literacy have been able to have qualitative primary education from the Agragamayee Schools.

Smt, Das is recognized for her numerous books and publications. She has extensively written on tribal socio-economic issues in local and national newspapers and social science journals to draw national and international attention to the injustices against tribal people.

A strong line of leadership within the village community has been created. The villages are made self reliant with the application of capacity building, sustainable and low cost technologies, market linkages.

For over twenty five years Ms. Vidhya Das has directed her energy and efforts so as to enable the tribal and rural women and folks to attain better life and livelihood with dignity.