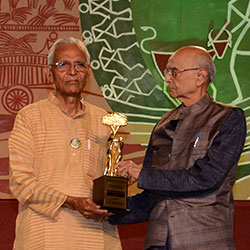 Dedicated and a selfless visionary are synonym to Mr. Jaywant Mathkar. Since his teenage Mr. Mathkar got associated and followed the well known Konkan Gandhi Appasaheb Patwardhan. For more than six decades, since then, Mr. Mathkar has been involved in Sarvoday movements. He brought development in his native Sindhudurg  as well as in Maharashtra through many Gandhian organisations. Also at all India level to some extent Mr. Mathkar helps in policy designing and bridging various social barriers.

Through the efforts of Mr. Mathkar and his associates, migration of peasants and landless people to cities outside Sindhudurg has stopped. As the Vice President of Gopuri Ashram, Mr. Mathkar strives to bring an overall development of the village community. Under his leadership, invented and installed smokeless chulhas in 2010 in 274 homes, conducted cleanliness drives in villages and installed biogas plants in homes. It supports several Gram Panchayats that have won the state and central government’s Model Village awards. Gopuri Ashram has worked on sanitation initiatives since Mr. Patwardhan’s time and moving ahead Mr. Mathkar has contributed significantly with constant efforts to further strengthen the initiative. He has also helped set up several women’s self help groups. In 2010-11, Mr. Mathkar promoted 35 SHGs involving 350 women who have been empowered.