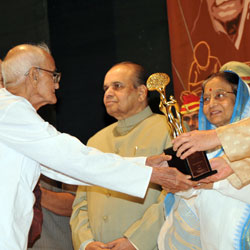 Mr. Chunibhai Vaidya's name is synonymous with 'Resistance to Justice' and commitment to the cause of social development.

After undertaking Sarvodaya publication work for more than 12 years in Varanasi, Chunibhai returned to Gujarat during the Gramdan movement.

In the course of a life devoted to social service, Mr. Vaidya has successfully compelled the Rajasthan Government to close down liquor shops, got the MLAs pension law cancelled and was instrumental in drinking water supply to more than 352 villages. He has got canals desilted and constructed underground check dams irrigating more than 8000 acres of land.

He has successfully opposed MNC Cargill's advent in Gujarat, opposed a mega-port project at Umargaon, demanded legal action on conversions, directed hundreds of crores of rupees to affected villages during the Kutch earthquake, led Gram Swaraj movement, succeeded in getting 20,000 acres of land given freely to 7000 beneficiaries, organized a 30,000 strong procession to support prohibition and managed to stop the transfer of grazing lands in Kutch and Junagadh.

Mr. Chunibhai Vaidya is presently engaged in actively running a movement to establish legally that natural resources belong to society and not to the government.

The 92 year old Mr. Chunibhi Vaidya is a true Gandhian and continues to be a symbol of hope for millions of people, in and around Gujarat.