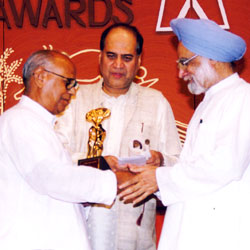 Joined the Indian Air Force as a Commissioned Officer but soon thereafter, resigned to join the Bhoodan Movement. Finally, settled at Bankura in 1961. Took charge of the Gandhi Vichar Parishad as a Tattwapracharak under Gandhi Smarak Nidhi.

Community Assets were built as a result of the initiative of the villagers in scientific agriculture and development of skills. These assets were administered by Lok Samities organised in each village. In short, the rural community became an example of Gram Swaraj.

These activities which were Gandhian Constructive Work in its pure form became a target of the Naxalite Movement. Even life was threatened on several occasions. He Not only survived but continued missions vigorously to find that the murderers eventually became his followers.

Undertook massive programme of plantation and environmental upgradation in the draught ravaged regions of West Bengal and Bihar.

Has proved that Gandhiji's dream was not merely a flight of imagination - but can be transformed into a reality in the field.