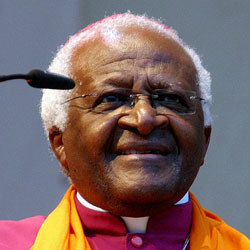 Comes from humble origins; father - a school teacher and mother - a domestic servant. As a teenager,earned his pocket money by selling peanuts at suburban railroad stations and caddying at the Killarney golf course in Johannesburg. Took up teaching. Resigned in protest against the Government introducing a calculatedly second-class state-run system of "Bantu education" in 1957.

Saw the Church as a likely means of service. Was ordained as an Anglican Priest. Became Associate Director of the Theological Education Fund in England. Returned to Johannesburg in 1975 as the Dean of St. Mary's Cathedral- the first black to hold that position.

Became the first black General Secretary of the South African Council of Churches in 1987. The Council became an important vehicle of black protest when the main African Nationalist parties were banned.

Formulated his objective as ."a democratic and just society without racial divisions".Was awarded the Nobel Peace Prize for 1984. Was elected the first Anglican Bishop of Johannesburg. Became Chairman of the Truth Reconciliation Commission – a crowning glory. Has been inspired by the teachings and philosophy of Mahatma Gandhi in all his activities.

Has been an outspoken and tireless Christian witness to the plight of the powerless black majority in a country ruled by a white minority with an official system of racial separatism. Carries forward the eternally bright flame of truth, non¬violence, peace between peoples and harmony among nations and above all the rescue and the empowerment of the distressed, harassed and oppressed sections of all communities.