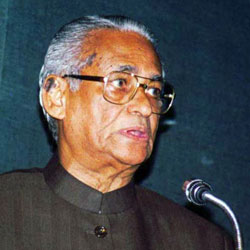 One of the most distinguished and respected public servants of the post-Independence era because of the high standards of efficiency and integrity he had maintained throughout his career.

Took his post-graduate degree in History and Economics from the Travancore University and M.Litt and D.Litt. degrees by research from the Annamalai University before joining the Indian Administrative Service (IAS 1948).

Has held several high positions in public life both at the national and international levels spanning a period of over half a century. These include: Secretary in the Ministry of Commerce, P rincipal Secretary to the Prime Minister, High Commissioner for India in London, Governor of Tamil Nadu and Maharashtra and ten years in senior posts in the U. N. Civil Service. Was a member of Rajya Sabha. A gifted and erudite speaker on a wide range of subjects. Has authored several books, articles and research papers and enjoys a high reputation as a writer too.