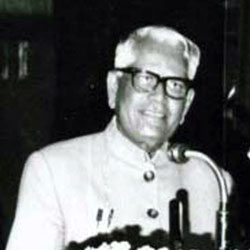 R. Venkataraman was the eighth President of India. Born in the village of Rajamadam, Thanjavur District, Tamil Nadu. Otained his Masters Degree in Economics from Madras University. Qualified in Law from the Law College, Madras.

Actively participated in the 'Quit India' movement of 1942. Suffered imprisonment. In 1949, founded the Labour Law Journal which publishes important decisions pertaining to labour and is an acknowledged specialist publication.

Joined the State Government of Madras as a Minister holding the portfolios of Industries, Labour, Cooperation, Power, Transport and Commercial Taxes.

Was elected as President of India in 1987.